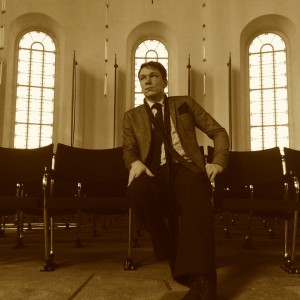 Mikael GB Horstmann has served. And he still serves. For him, service is not culture but nature. He comes from a gastronomic, or service-oriented, Frankfurt family and earned his first bread rolls in service in several Frankfurt five-star hotels and on executive floors of well-known banks and insurance companies.

While others do yoga, he cooks to relax. Studied Applied Theatre Studies and Business Law, worked for over ten years mainly as a freelancer in the areas of administration, organisation and logistics for projects and institutions in the visual and performing arts. From the former fringe activities of event organisation and protocol the brand herr mika has eben developed, under which Mikael GB Horstmann works as a trainer for manners, etiquette and non-verbal communication. Mikael GB Horstmann was honorary director of the Museum of Culinary Arts Kochkunstmuseums in Frankfurt, blogs on the topic of table culture and has been a professional flaneur in Frankfurt and the surrounding area since April 2012. 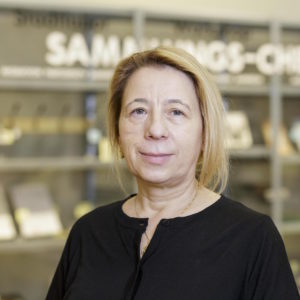 Calogera von Auw was born in 1961 on the largest, and of course most beautiful island in the Mediterranean region – Sicily. Due to the migration of her parents, Calogera von Auw came to Frankfurt in 1970 and has lived in this city ever since.

Through her father, a driver for the city of Frankfurt, she knows every corner of the city. It was a game in her childhood to drive from A to B in her mind and to repeat the routing. These are her first impressions of Frankfurt, whose development she has consciously accompanied since the 70s.

Professionally, she went into social-education. For 30 years she has been working for Caritas in Frankfurt. In addition, she pursues many different interests: Art, theatre, sports – a passionate Eintracht fan since 1971. Calogera von Auw loves to sing and collects old Sicilian songs.

Her mother, who worked at Städtische Bühnen, arouse her interest in theatre. In the 70s she was able to train with a Romanian variety group for one season and performed in the old TAT. In the 80s Calogera von Auw went through a design training and participated in the Select De Meo (fashion fair in Frankfurter Gesellschafthaus am Zoo).

For more than 18 years she has organized and carried out exchange weeks for young people in Europe. This led to her professional training as a tour guide. Since March 2001 she is a certified city guide of Frankfurt. 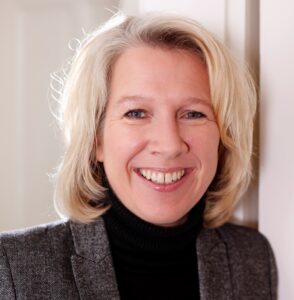 Birgit Jaretz was born in the Hanseatic city of Lübeck in 1966. After graduating from high school, she went to Rome to learn Italian and to get a taste of foreign culture.

After a five-year stay in Marburg, she moved to Frankfurt in 1994 to start her professional career at Suhrkamp Verlag. After working as a business journalist for the news services Bloomberg and vwd and a stay abroad in New York, she has been working as a PR consultant for healthcare companies since 2001.

At the same time, she has also been inspiring foreign guests to visit her adopted city.
What she likes about Frankfurt is its internationality, which lends the compact city a metropolitan character. The cultural offerings with the Museumsufer and the award-winning Frankfurt Opera also contribute to her love for the city. As a communications expert, Birgit knows how to warm her guests’ hearts for Frankfurt and she also likes to infect them with her enthusiasm.

Hannes Pflügner was born in Frankfurt am Main in 1980. After graduating from high school, he studied history, politics and sociology at the Johann Wolfgang Goethe University in Frankfurt.

Being passionate for history, he was looking for a professional opportunity to inspire people for it. After first steps as a tour guide for the City and Industrial Museum of Rüsselsheim in 2008, he found great pleasure in bringing history and places closer to people in their free time. When industrial history and Opel were no longer enough for him, he found a magnificent field of history with his favourite city Frankfurt am Main.

Even during his studies, Frankfurt was always his hobby in history. The great trade fairs, the imperial elections and coronations or the National Assembly in Paul‘s Church are highlights of the city. But also the “little things”, such as Kleinmarkthalle, the bridges or the history of the subway can be told in an interesting and exciting way.

Today’s Frankfurt with its airport, the skyline, the “shopping street” or the reconstruction tradition, is absolutely worth telling. 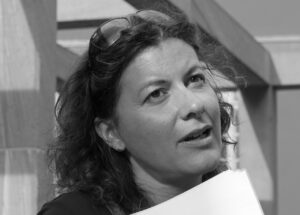 Rita Pfahls has spent almost half of her lifetime in her adopted City Frankfurt. Born in 1975, she grew up on the countryside (Spessart) and lived in Gelnhausen for a few years. As so often when people move to Frankfurt, it is because of the job. It was the same in her case.

In her normal daily routine, she leads a team of employees and together with them she sells asset management services for institutional investors. After work, she shows her clients and business partners from all over the world Frankfurt’s ‘specials’, whether in German or English, and if desired, in Hessian language. All this gives her great pleasure. Besides, she also acts as a management trainer/coach from time to time; this also has a lot to do with city tours.

Rita quickly realized that Frankfurt has much more to offer than just a job and her beloved soccer club Eintracht Frankfurt: With its more than 180 nationalities, Frankfurt is multicultural, offers a diverse concert, art and cultural program on the one hand and – in her opinion indispensable for the diversity of a big city – apple wine pubs with village character, many „drinking halls“, the market hall and much more ‘social life’ on the other hand.

She loves interacting with people and is an enthusiastic Frankfurt woman. As a city guide, she is happy to pass on this feeling to non- or new-Frankfurters, and to Frankfurt visitors.

The contrast between the city’s eventful history over the centuries and its current appearance as an important global (financial) metropolis is something Rita would like her guests to feel. 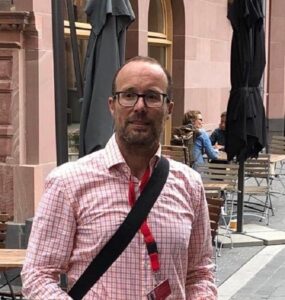 Thomas Jepp was born in Limburg in 1971. His father Werner played in the 50’s football at Rot-Weiss Fankfurt. Since he also worked directly near the old opera house for the DFS, he took his little Tommy with him to Frankfurt in the mid 70’s. He especially liked to show him the Kleinmarkthalle and its surroundings.

From the age of 15 on, Tommy took the train to Frankfurt-Höchst every other day to start a career as a professional footballer after he was appointed to the Hessen selection. Over the next three years, he got to know all the football fields in and around Frankfurt and naturally came into close contact with the Frankfurt dialect. Already in the 80’s he was fascinated by the strong contrasts of the city, its internationality and of course the Frankfurt cuisine.

At the end of the 90’s, he moved to Mainhattan for professional reasons and ended up at the Frankfurt stock exchange. After working for LBBW, the Swedish SEB and as a partner at the Norwegian ABG Sundal Collier until 2018, he decided to follow a completely new path in life.

Social contact, the exchange with people are in his focus, learning from and with others is his motto. His interest in history was born in his cradle, when he learned all about Limburg from his mother, who was originally born in Hessen, and all about the flight, expulsion and the old homeland from his Silesian relatives.

After his marriage to his Swedish wife Anna in 2010, he was even allowed to introduce his adopted home city of Frankfurt to foreign guests as a nonlocal. So he decided to become a city guide.

Tommy’s passion is the vivid communication of history and stories, optionally also in hessian dialect. He likes to lead his guests to almost every corner of the city, also by bike around Frankfurt, for example along the green belt, because cycling is his second passion.